You can pre-order the STAR WARS: THE BLACK SERIES TROOPER EVOLUTION 4-PACK, featuring four 6-inch figures not available anywhere else, including the long-awaited PHASE II CLONE TROOPER and a FIRST ORDER STORMTROOPER with exclusive red pauldron! 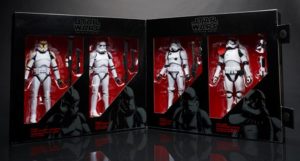 STAR WARS: THE BLACK SERIES 6-Inch TROOPER EVOLUTION 4-PACK
(Ages 4 years & up/ Available: November 30, 2015)
Enter the world of Star Wars and launch into action and adventure! Discover a galaxy of starships and vehicles, and get immersed in exciting stories of good versus evil. Born from the remnants of the Empire, the First Order emerged as a power to be reckoned with in the years following the battle of Endor. The First Order constructed massive fleets of next generation Star Destroyers and TIE Fighters, and bolstered surviving Stormtrooper legions with fresh recruits and powerful new weapons. The Black Series brings exquisite features and articulated movement, which for every devotee of Star Wars means quality and realism. Take command with this Stormtrooper 4-Pack including Phase I Clone Trooper Commander, Phase II Clone Trooper, Imperial Stormtrooper, First Order Stromtrooper Officer. Picture new moments of adventure with 7 included accessories. Collect and battle with these and other figures and vehicles from Star Wars. Each sold separately.