I Do Know What I’m Doing, Thank You Very Much!

Abigail and I went to our 2 year old nephew’s birthday party in Indiana this past Saturday. It was our first real outing with Wesley, besides going out to the doctor’s office or the grocery store. Now that I think about it that was his first time in Indiana!

The party was held at one of those kids activity and play establishments. Face painting was a big hit with the kids (ages 1-9) but there were all sorts of other activities as well. While the kids played in the ball pit or sang along with the staff the adults (in general) stayed in the center of the place and talked. The food was in the center and the activity rooms were all around it. I liked that the rooms were all windows so you could see what was going on no matter where you or your kid was. Wesley obviously stuck with us: 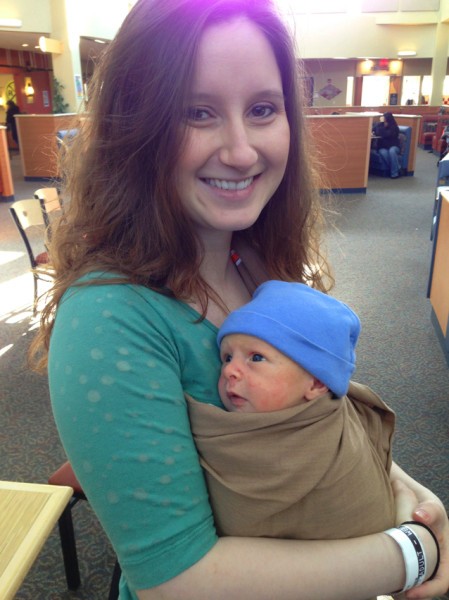 I don’t think we were there more than a few minutes when Wesley decided to pee out of his diaper and onto my wife. Abigail was obviously upset because she didn’t have an extra outfit in the car and I was the one that had changed him last. The diaper was the correct size for him and was properly installed. The little guy just REALLY had to go.

I offered to change him and allow her to try and get cleaned up as much as possible. Granted this was the first time I was about to change him in public (outside of the doctor’s office) but I had changed well over 100 diapers at this point. Wesley was about to turn three weeks old the next day and I was pretty much the only one changing diapers for the first two weeks. Abigail needed to stay off her feet.

Anyways, I took Wesley and started walking towards the bathrooms. The “Shared Family Bathroom” was the first door I saw and figured it would be a good place for changing him. The door was unlocked so I walked in with him, all peed out on himself in one arm and the diaper bag in the other. That is when, no joke, a lady in her 40s was walking out and met eyes with me. The only words she spoke to me were with a disapproving and judgmental look on her face: “Do you even know how to change a baby?”

I was seriously taken back. Where does a complete stranger get off saying something like that? She doesn’t know me. I said “Yes I do, thank you very much!” in a raised voice as she walked away and I stopped the door with my foot from closing in my face. The change went fine and there was not another leak-out. FYI.

The incident got me thinking though, “Why did she say that?” Maybe it was because I look young. Maybe it was because I’m a guy. I feel sorry for the guy she tried to raise kids with. He must have been a real slacker! What kind of an answer did she expect from me? “No, can you help?” or “No! I’m just looking for his mom. Is this your kid?” I mean seriously. That lady had no reason to do that. I am worried a little that this is only the beginning of my adventures with comments by strangers. Wish me luck! We plan on doing a lot of travel with this kid. Abigail and I are not home bodies and we aren’t about to let this kid change that.