A Mother’s Love Is Complicated and Beautiful

Motherhood changes you. In the months leading up to and directly after the birth of our first child I have seen my wife become a mother to a precious baby boy. She is still the women I fell in love with, but there is an added grace, strength and beauty that motherhood has given her. It is simply amazing to me. Seeing this change in her deepened my understanding of the stories shared in Mamma Love. These stories are powerful, sobering and encouraging all at once.

Several months ago, around Mother’s Day last year I found out about the book from various media outlets covering her Kickstarter campaign. There was a publishing deal that didn’t work out and almost caused the book to not be produced. The Kickstarter campaign allowed Ali to get the book printed independently. Seeing the book printed was the culmination of a 12 years journey in putting this masterpiece together.

The bond between a mother and her child is complicated and deep. There are highs and lows that can’t be fully described in words. Images can capture so much more. When these powerful images of motherhood and words are assembled so well that you forget where you are when reading about this special relationship you know you’ve been reading Momma Love: How The Mother Half Lives by Ali Smith. 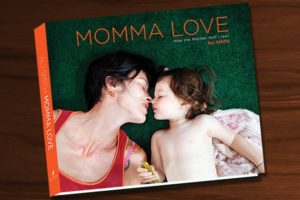 Ali Smith masterfully assembles text and striking imagery to share various aspects of motherhood. Not just the highlights and picture perfect moments that culture and society say motherhood should be either. She shares the struggles and daily trials of motherhood too. Motherhood is strength and vulnerability. It is love and pain.

Some of the stories shared in Momma Love include:

Looking for a holiday gift idea for a mother in your life? This book is it!

To get a small taste of the book read “Kitty and Olive, Dessert Truck.” You can order a copy of the IPPY Award-Winning book at MommaLoveTheBook.com. I promise, you’ll be happy you did.