Ryan Miller is an incredibly talented friend of mine. Please take a look at his entertaining new book “How to Feed Your Parents.” The book is now up for preorder on Amazon.com.

For more information you can see the press release below or visit his website at standingintheshallows.com. 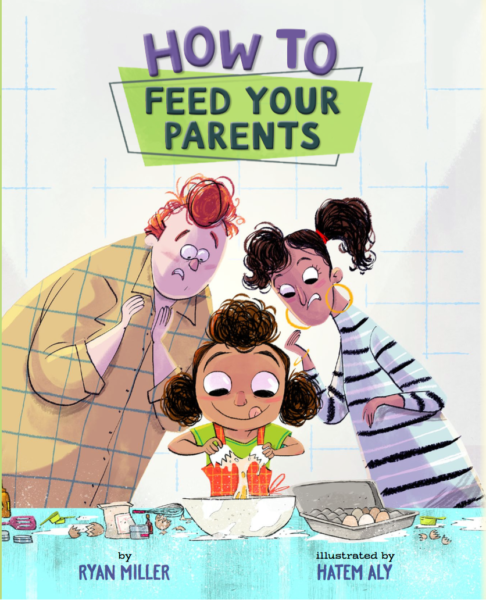 Sacramento, Calif. – Inspired by his young children’s love of cooking and food prep, Sacramento native Ryan Miller wrote How to Feed Your Parents, available in bookstores locally and around the country Aug. 7—and for preorder online now. A local launch party, open to the public, is scheduled for Aug. 8.

The picture book tells the story of Matilda Macaroni, who longs to taste exotic dishes, but whose mom and dad refuse to eat anything but noodles, nuggets, burgers, and pizza. Undaunted, Matilda works with her grandma and babysitter to learn kitchen safety and globally inspired recipes. Ultimately, she hopes to encourage her parents to try something new that they just might like.

The book also includes a full quiche recipe that every member of Ryan’s family—including his wife and three children (ages 5, 9, and 11)—worked together to create.

This is Ryan’s first book, which he wrote over a series of open writing nights at a local comic shop, Empire’s Comics Vault, before pitching it to an editor at the New York-based Sterling Children’s Books. The publisher’s recently released fall catalog features How to Feed Your Parents as its lead title for the season.

Ryan grew up in Rosemont and later attended Sacramento High School. He studied journalism at Cal Poly in San Luis Obispo, where he lived for 18 years, working as a writer and newspaper editor after he graduated. He returned to the Sacramento area in 2015 to raise his children closer to immediate and extended family. He currently works in marketing.

The illustrator is the British Columbia-based Hatem Aly, who illuminated the 2017 Newbery Honor Book The Inquisitor’s Tale. His work is also visible in an increasing number of titles, including James Patterson’s Not So Normal Norbert, the recently launched series The Unicorn Rescue Society, and Meet Yasmin!, also coming in August.