I Lied to My Wife for Weeks

a.k.a. Seven Tips for Planning Your Wife’s Surprise Baby Shower

My wife recently had a surprise baby shower that went really well. That is kind of surprising when you take into account that I organized it. Plus, I’m not good at keeping secrets. In fact, if you tell me a secret, I have to share it or I’ll explode. Scientific fact, well not exactly, but close.

Last summer my wife and I found out that we were expecting. It was a bit of a surprise, but not completely unplanned. We had just come out of a very sad miscarriage a few months earlier. Towards the end of the summer one of my wife’s sisters said “Hey, we need to talk about a baby shower for Abigail.” I was like “Sure.” Life got in the way and nothing happened.

All of a sudden it was the end of December and the family was all together around Christmas. The same conversation happened, but between the nephews making noise while crashing into things and all the holiday festivities going on nothing came of it that weekend either. Abigail and I went on this crazy New Year’s Eve trip and had a lot of time to talk. One of the reoccurring things that came up was how much Abigail wanted a baby shower, but was afraid nothing was going to happen. That is when I thought, “Crap, I need to make this happen for her.”

I took the initiative and started a Facebook message thread with two of Abigail’s really organized sisters and my super craft sister. I secured a date, time & location to rent an event hall. The first choice decided via Facebook was should Abigail know about the shower or should it be a surprise? I voted for a surprise and they agreed. 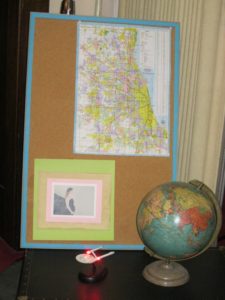 Next up? Theme. Abigail loves travel. That is pretty obvious when you know that she is a SkyWaitress. We gathered maps, globes, a couple of suitcases and a trunk for decorations. Some world flags, a board with our baby’s name under a sheet for the name reveal, candy from around the world, ect. It also helped that Abigail & I had just gotten some maternity photos taken. Those went up around the room nicely as well.

Did you notice the Enterprise leaving orbit in the photo above? We are both Star Trek fans now. I have been a fan my whole life. It took flying to Australia for the 2009 movie premiere to convince her. 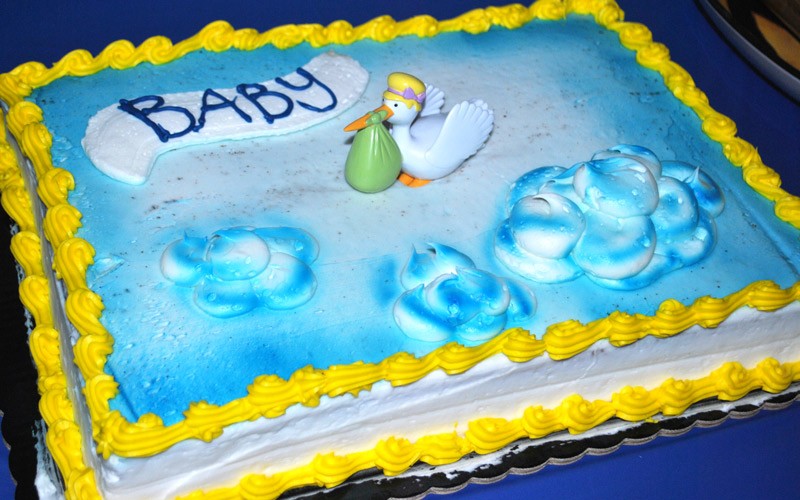 Then there are the typical baby shower items as well. We had a regular chocolate cake to eat. It had a baby stork theme and was only $26 for a ½ sheet cake from our local grocery store. Each table had a nice table cover, baby jungle themed disposable dishes, various nursery shaped cookies, diaper cakes and baby stuffed animals.

I’ve never purchased anything off of a baby registry independently before. It has always been done with the help of my wife. And with the viewpoint Abigail had of expecting to not even have a shower it was hard to convince her to help me with adding items to a registry. So I did it myself. It turns out to be pretty easy technically. You can log onto Target or Amazon or a million other websites and just create a list.

I spent one Saturday morning asking her what she wanted to be added, finding things I though should be added, etc. A few days later I asked my mom, my sister, a few friends online and Abigail’s sisters for suggestions. All in all I was happy with it, but Abigail wouldn’t even look at it. Once people started buying things she’d get email notifications about the gifts being purchased. This only made her a uneasy. She began making comment like “Why are all these people buying us stuff? How did they know? When are we going to get it? You know this baby could show up any minute.” I just had to play dumb and kept saying she should ask her sisters, “Maybe they know something I don’t.” 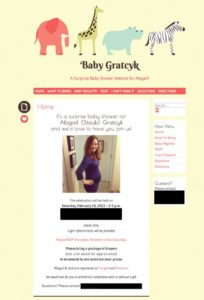 I wanted to have a nice turnout for Abigail’s shower; in my mind that would have been over 15 people. I knew that if we invited just our close friends  and family that might not happen. Lets face it. Everyone we know is pretty busy. So, I opened up the guest list making to include any of Abigail’s Facebook friends that lived locally. Several of those friends I had never met so I sent out a kind of awkward message to them that was basically, “I’m planning a surprise baby shower for my wife and would like to your mail address to send you an invite.” About 2/3 of them responded with an “Oh, that’s adorable” kind of message and 1/3 didn’t respond. I’m not sure if that is because they found the message creepy or because the message ended up in their Facebook “Other” folder and they never saw it.

I opted for an adults only baby shower. The main reason was I didn’t want to have to deal with having to provide childcare. The invitations said ‘Adults Only’ so guys could have attended, but none other than myself did. We also asked for children’s books instead of cards from the attendees. It was nice to have a small children’s library started at the party AND have the participants names along with a small note to the the new little guy inside each book’s cover.

The invitations included a basic date/time/location invitations, but also a teaser that we would reveal the baby’s name at the shower before we shared it online. I’m not sure if that helped make anyone want to attend, but I’d like to think so. It was also mentioned that light refreshments would be served. We ended up offering real food instead: mostaccioli, salad and tacos.

I had a small website setup for the shower, being a web geek like I am. It included links to the RSVP form, directions to the event, an FAQ page and so on. I blocked our home IP address from seeing the site and set it up instead to show an error message redirecting people to her mommy blog. She never ended up noticing, but I thought it was a nice precaution. The website and invitation also had a matching theme. I was very proud of that and thankful to Caroline Moore for sharing the theme online so other could use it!

If you’ve attended a shower you probably know about Baby Bingo. We had custom baby bingo cards made up matching the invitation and website artwork. As Abigail opened gifts the guests would place a bingo piece on the card for the item received (baby wipes, shoes, pack-n-play, etc.) When someone got a bingo they would receive a prize. We also played a “How well do you know the expecting parents?” game. Thanks to my mom and mother-in-law more people than I am comfortable with know our first words and some embarrassing facts about Abigail and I as children. Since Abigail & I travel a lot we also did a game that included who has been to what country.

The door prizes we had included $10 Starbucks gift cards and some nice scented candles. If I’d known more about popular lotions and body wash stuff I might have added a few gift baskets from Bath & Body Works. Oh well. What we had worked out fine.

6.) Getting your wife to the party, include friends in the deception!

We are planning on enrolling our child at a local child care / preschool. Part of the enrolment process includes an application, tour of the facilities and interview. I simply told Abigail that we had an interview on the day of the surprise shower. It was on a Saturday so I had to add some believability to the story. The story went that the interview was part of an open house held for the community. Pretty believable, right? An added level of the story came in when the director of the school agreed to call Abigail and confirm via phone the time and date of the “interview.”

Anyone that knows me knows that I have real trouble keeping secrets that are surprise related. Christmas for example is a terrible time of year for me. The moment I buy someone a gift I want to give it to him or her. That is why I can’t shop for Christmas in the summer time, but that’s another post for a later time. Let’s just say I did an amazing job at lying to my wife for the first time ever in our marriage. Even her sisters purposefully didn’t return her calls the week of the shower because they also wanted to spill the beans! 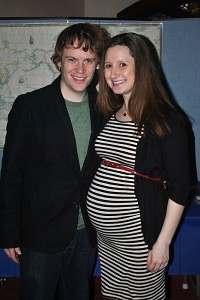 The party was a hit. We had like 40 people. There were even a few people who traveled from other states (Indiana & Kansas) to attend the event in Illinois. Abigail was completely surprised and we had enough food that everyone that wanted was able to take some home. We also got to see some old friends we hadn’t seen in a while and are not 95% set with baby stuff.

Abigail was so surprised that she was on a “baby shower high” for days afterwards. Hearing that from her made me smile. That was exactly what I was hoping for; for my wife to love it!