And Then My Wife Says, “Could That Have Been What Caused The Flat Tire?”

Just as we started our journey down the highway to a family movie night at the grandparents yesterday we heard a loud bang, the car shook a little and our tire pressure light flashed on. My wife’s first words were “What was that? What did you hit?” I knew it was not good. My foot let up on the gas. I turned on the car’s hazard lights and pulled across three lanes of traffic to the I-290 shoulder. When I got out of the car I saw this:

It wasn’t terrible but the tire was a loss. There was about a one inch split in the tire right by the notch in the rim. While sitting on the side of the road waiting for help with putting the spare on, I expressed how confused I was about the loud bang when it blew. There was nothing in the road. My wife turned to look at me and said “Well, I did hit a curb pretty hard the other day. Could that have been what caused the flat tire?” That was the first I’d heard of the event. She figured if it was bad enough she would have gotten a flat right away, but nothing happened so “it must have been okay.” 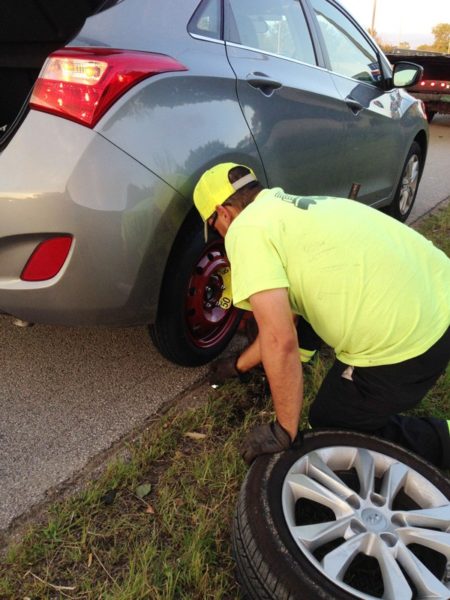 The tow truck guy arrived and we got the spare put on without much issue. He had trouble getting the jack underneath the car because it was so low to the ground. I could not have done that on my own nearly as easily. The last time I tried to change my own flat tire it was on our old car and took me forever. Long enough in fact that after 40 minutes I called in some help. Cars and mechanical things are not my area of expertise. The fact that my son loves cars as much as he does now gives me hope that eventually there will be someone in the family who knows what they are doing with vehicles.