Brewing for a Newborn Celebration and Beyond!

I’m not a big beer drinker. I do like beer though. I like it dark and complex. I only drink beer when out with the guys (doesn’t happen often enough) or on special occasions like a sporting event or celebration. The birth of my child fits into the celebration category in my book. After talking things over with a friend of mine who runs She Bears Brewing we decided to make a custom brew to celebrate the birth. Not only that, but we are making enough of it and putting enough alcohol in it to have it last a while. Why? I want to give a few beers out as celebration for the birth. I also want to drink a bottle every year until he’s 20 and then share a beer of the special brew with him on his 21st. Cool idea right? I had my friend Jeremy, of She Bears Brewing, write up something about the beer since he’s the beer geek:

The Imperial Stout we brewed will have eight different malt varieties to add to the complexity—especially as it ages. In addition to the standard pale malt base and some caramel malts, I decided to add some biscuit and aromatic to add some lighter malt notes. The chocolate and special B will give the beer a deep roasty flavor with some bitterness and dark colors. To hit the SRM I was looking for, along with the dark bitterness that a good imperial stout should have, I used a combination of black patent and roasted barley (which will help with the coffee flavor).

All of that being said, I also added lactose to give it that sweet and silky flavor that will pair well with the roasty and chocolatey flavors. I chose a single kind of hops to add. Hops Direct and Puterbaugh Farms introduced a new unique hop called Belma. They note that Belma is a very clean hop, with a very orange, slight grapefruit, pineapple, strawberry, and melon aroma. I really notice a strong citrus/strawberry smell.

I chose an English Ale Yeast, a top fermenting yeast that leads to some fruity esters that pair well with stouts. Hopefully it will be a good blend with the Belma Hops and coffee. After all is said and done with the secondary, I will add cold press coffee to really round it out. Overall, it should come out to be about 11% ABV with an IBU at roughly 65.

A short video of the day’s happenings: 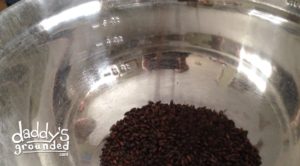 What are the next steps in the process you might ask?
Bottling the beer  and then drinking it of course!