This post was written a few days after my son was born. It’s being posted today (one year later) as a reminder to myself of the wonder and intense experience of childbirth. This is the day I became a father. This is the day that changed my life forever. This is the day I learned that I could love a child more than I had ever thought. I hope you enjoy walking down memory lane with me today.

Abigail and I spent the afternoon at the zoo on Saturday. We stopped to see a few animals but walked around mostly. It was a nice reminder of our dating days. With all that has gone on in our lives in the last few years date nights have been more about live music and food than walking around at parks. While walking near the rhinoceros exhibit we both randomly read a sign out loud at the same time and then laughed at each other. I love her. We will reach 7 years as a married couple this month. It has been a crazy up and down ride, but I wouldn’t trade it for anything.

Afterwards we had Mexican food for dinner and skipped plans for going out to the movies. I was little bummed at the time that we didn’t go out to see a movie, get popcorn and soda. One of my favorite things to do (other than travel) is go to the movies. It turned out to be the right choice though. We went home instead and relaxed a little. Spent a couple of hours talking, watching Frasier on Netflix and reading online. It was a pretty typical weekend evening for us. Except that the birth story was about to begin!

Abigail was having some mild contractions so we decided to get into bed and rest around 9:30 p.m. I was secretly excited about what the night might bring and tried not to show it. Abigail had become a bit weary of my excitement around expecting Wesley to show up any day and was starting to be convinced labor was “never going to happen.” Her words, not mine. We didn’t end up “sleeping” until past midnight. Abigail was in pain. Her back hurt from the extra weight of baby during pregnancy and all the walking we had done that day. The contractions were beginning to get stronger and more frequent.

Abigail would get as comfortable as she could lying down in bed before a contraction would hit that would force her out of bed. It hurt her too much to stay in bed while the contractions happened. I took small naps with her between them on the bed and then followed her around the apartment as she walked through the contractions. I wanted to do more, but didn’t know what to do. I didn’t want to upset her so I’d get her some water or her exercise ball as requested and not before. I offered to help with a back rub but she wasn’t interested. She was all about the pacing. This went on for about an hour when she texted her mom and two of sisters around 1:00 a.m. to say what was going on. The contractions were about five minutes apart for an hour at that point and I was really starting to get excited to see my baby boy arrive. 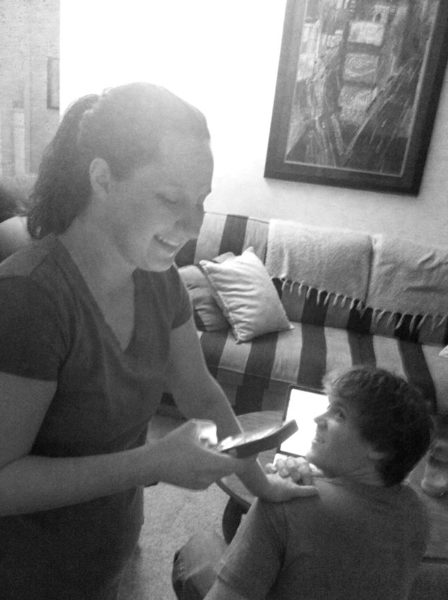 Updating our social media feeds & blogs before going to the hospital.

Abigail’s mom & sisters arrived from Indiana around 3:00 a.m. and wanted to get moved on to the hospital. I called the midwife (I hate phone calls) and she phoned ahead to the hospital to let them know we were on the way. This was finally it! I started to show my excitement while going through the final checklist of things to bring with to the birth. We had to update our blogs before we let for the hospital of course so in between a couple contractions we updated social media and such. I love the photo Abigail’s sister got of us doing so (posted above.) We both look so happy and we were, just happiness mixed with a little apprehension of the unknown. It was really great to have her sisters be with us at the hospital to take photos and videos of the labor. That allowed Abigail, her mom and I to focus on the labor and not worry about documenting it.

The drive wasn’t too bad for Abigail, but there were a couple moments when it was clearly very uncomfortable. Her mom road with us in the back seat while Abigail and I were in the front. This was the part of labor that second most frightened me before it happened. The Bradley method class we took was all about waiting until later in the labor before leaving for the hospital. That helped fuel my imagination with all sorts of images of us waiting too long and having the baby in the car. Thankfully that did not happen and we arrived at the hospital without any serious incident. 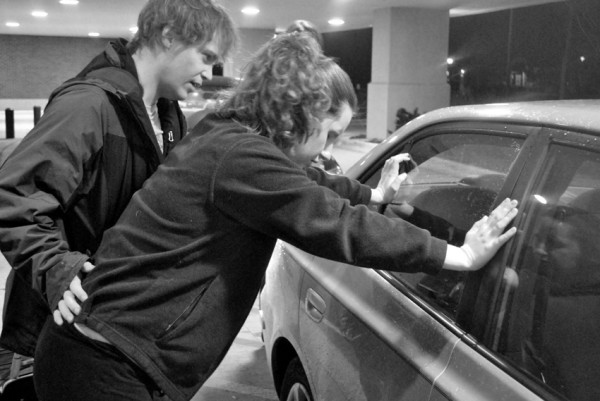 We arrived at the hospital just as another one of her contractions was starting. She had to pause next to the car a minute before we headed inside.

When we got to the hospital Abigail was set up in her room for fetal doppler monitoring and as such had to stay on the bed at first. We expected that. She was starting out in the hospital about where she was a few weeks earlier at the doctor’s office, dilated to 3 centimeters. Her blood pressure was registering as high a few tests in a row. We didn’t expect that. Maybe it was from switching between home and the hospital that helped cause it. Even after the monitoring was over she had to get tested several more times before the blood pressure had lowered enough to where the nurse would allow her to labor in the tub.

Labor began with several tests and a stay in bed requirement. It was later lifted as test results showed her blood pressure normalizing and the baby doing well.

Abigail made it into the tub and I started up the laptop. We had gotten a good start on a labor playlist on Spotify before labor had started. The MacBook Pro we have has pretty good speakers. Anyways the wifi network at the hospital for some reason was blocking Spotify traffic but allowed Pandora. So we listened to that for about 40 mins before Abigail asked for it to be turned off. The water jets made it hard for her to hear it. She was doing really well with managing the pain of contractions at that point. I was also in a pretty confident state of mind at this point. Nothing too serious had happened, so all my “dooms day” fears were held at bay.

The rest of the labor was a bit tedious. Abigail spent a lot of time on the exercise ball and hugging the side of the hospital bed. Each time a contraction would come she’d stand up straight or stand and lean over the bed. I’d rub her shoulders and her mom would rub her back. It was a team effort and was very important to Abigail. I spent the full labor no more than 3 feet from her at any point. A few times I tried to walk to the other side of the room to get a snack or have a drink and she’d say “Where are you going? I need you!” I’m glad she felt like I was such a great support for her but I honestly felt like I wasn’t doing enough. What else did I think I should be doing? I have no idea. It just seemed like I should have been able to help her more than with some coaching and contraction times.

The intensity of the actual birth was more than I expected. Seeing live births on YouTube vs seeing someone you know and love going through so much are incredibly different. It is tough to watch. I do credit the many hours of birth videos I watched before seeing Abigail’s birth with allowing me to not just coach her but to also be very interested in the progress of Wesley arriving “down there.” The conversation we had about childbirth and what I wanted vs what was going to happen was a little night and day. Before taking the birthing class I was hoping to just hand out cigars and stay in the waiting room like Joey in Friends. That turned into “I’ll stay up by the head” and then into what really happened. I watched Wesley arrive into the world while supporting my wife in the labor and delivery room and even the cut cord!

I cried tears of joy when the little dude arrived. That doesn’t happen easily. It was suddenly a reality and no longer talk. We were a family. 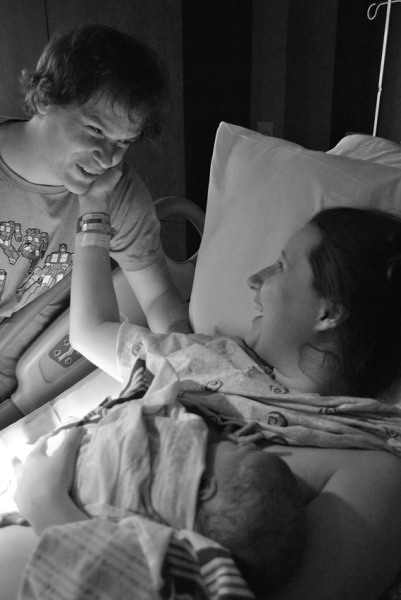 Our first photo as a family. So so happy.

I am so incredibly proud of my wife. Abigail set out to have a completely natural birth (no pain meds or an induced labor) and was able to accomplish that. She is the most incredible, caring and strong hearted woman I know. In short, she’s a keeper. 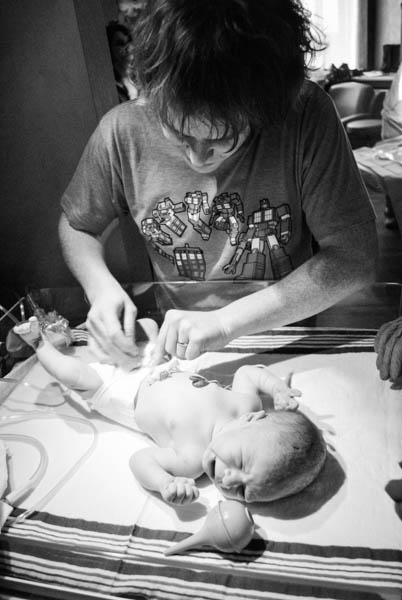 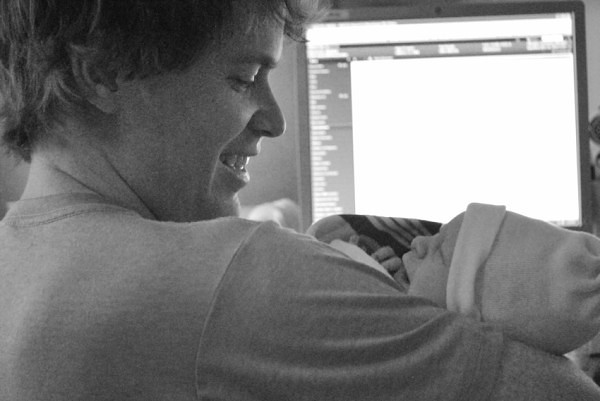 The first time I held Wesley in my arms.

It hit me when they handed me Wesley after he had been weighed that I had entered the Dad club. It was real. It had finally happened. That thought was also immediately followed up by “Don’t drop him, don’t drop him, don’t drop him.” That’s why you hold him with both arms, in case one fails. Just FYI. Words cannot express the awe I felt that day of seeing my son being born. Hearing him cry for the first time was beyond amazing. I’m a dad now and I love my expanding family unit more than I ever imagined possible.

I hope Abigail and I are a cute old couple that still takes those walks at the zoo or out in a park in 40+ years. We’ve had a great start and I know many adventures to come. For now I tip my hat to the future and look forward to what it has in store for Abigail, Wesley and myself. I hope you join us on that ride.