Disclosure: We were invited guests at the opening of The Edge Theater’s 2018 production of “A Klingon Christmas Carol.” 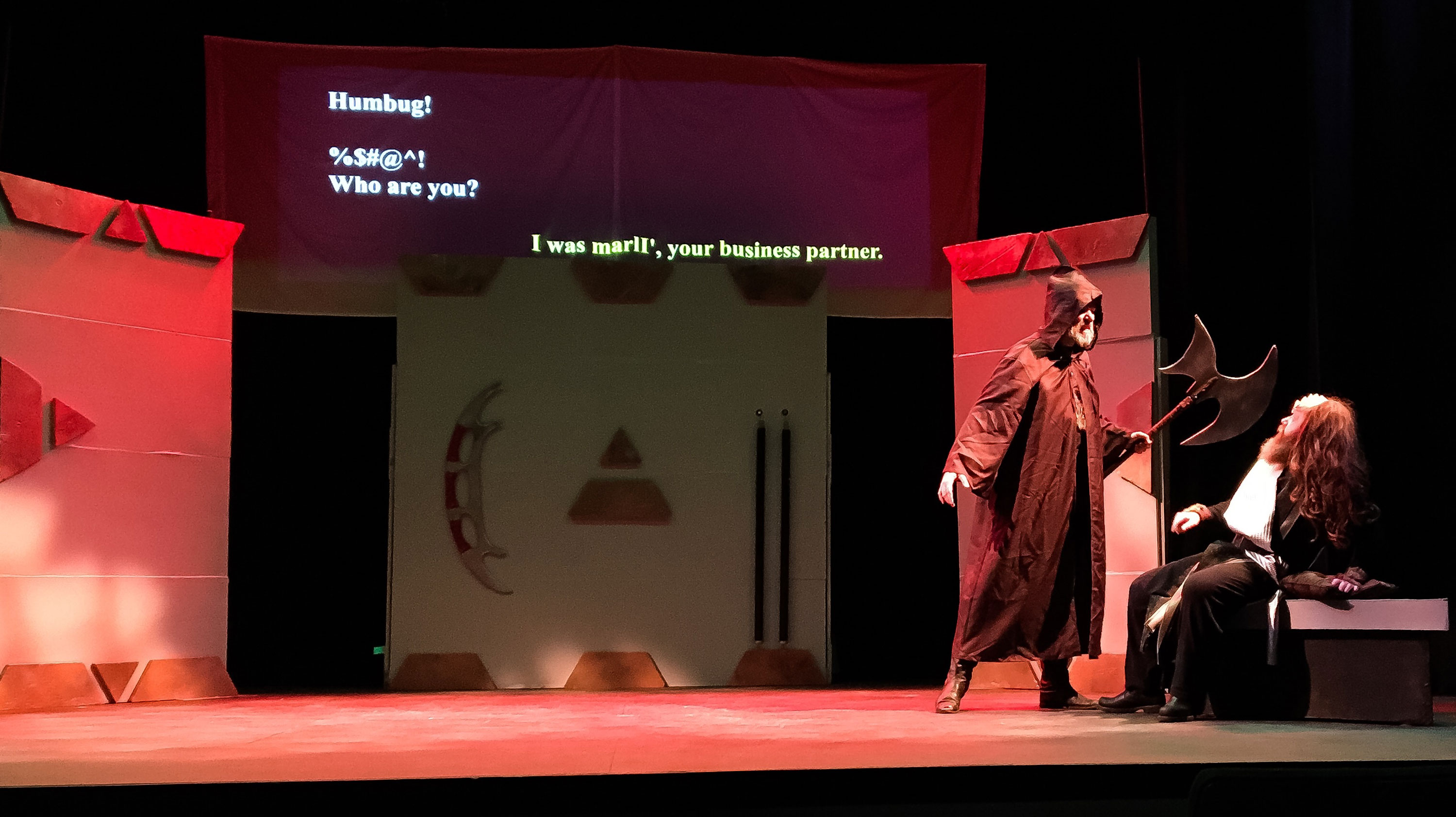 Abigail and I attended the press opening of “A Klingon Christmas Carol” at The Edge Theater in Chicago, IL last night. I, as one would expect, enjoyed seeing the throughly entertaining show. One does not have to be an uber-geek to enjoy this sci-fi retooling of this Charles Dickens holiday classic.

Seriously, it was so much fun. No actual knowledge of Klingon required. You very quickly forget to notice that it’s in an alien language. If you do get lost along the way there are supertitles (yes, that’s a thing) that translate the “original Klingon” into English.


The cast even hung out after the show for photos. This is a 360 photo. Take a look around.

“I really loved how they were able to translate such a human story to Klingon morals while keeping it relatable. I swear, even if you’re not a die hard nerd like me you’ll really enjoy it. But being a nerd is a definite bonus. 🖖🏻” – @Skywaitress 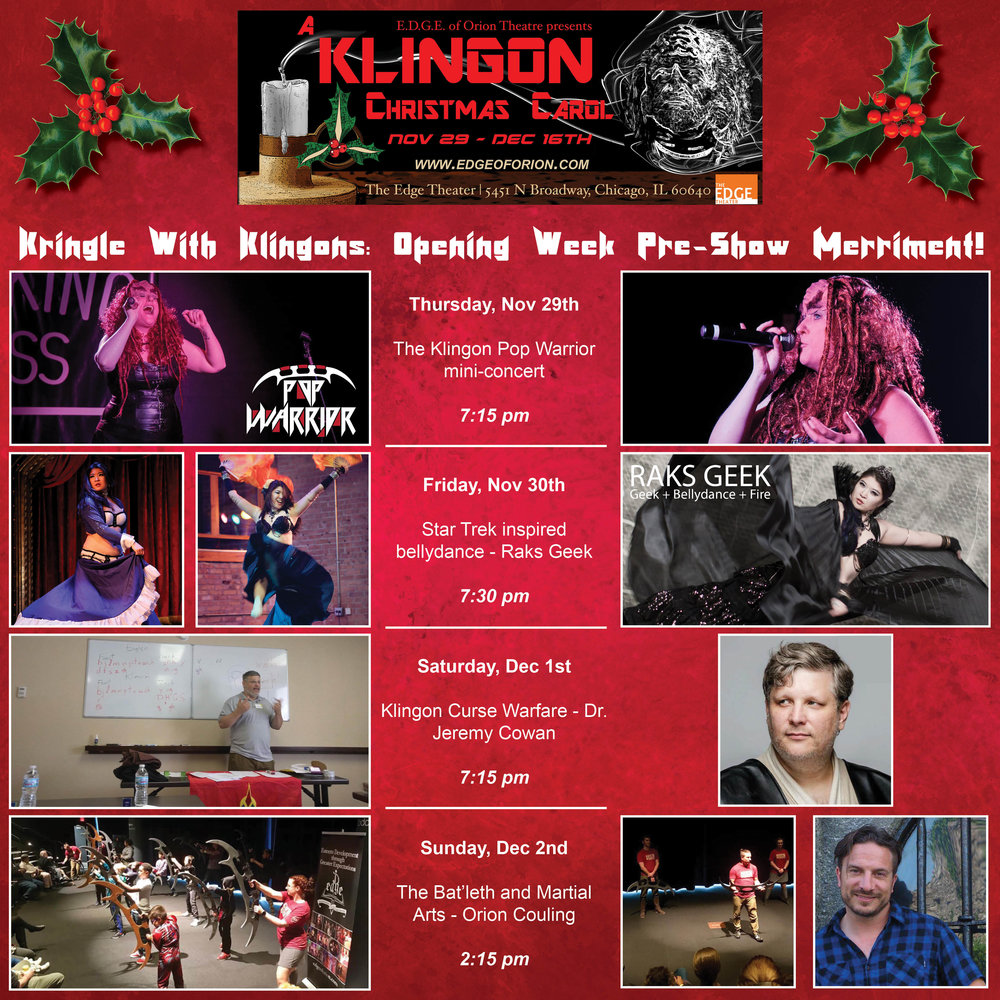 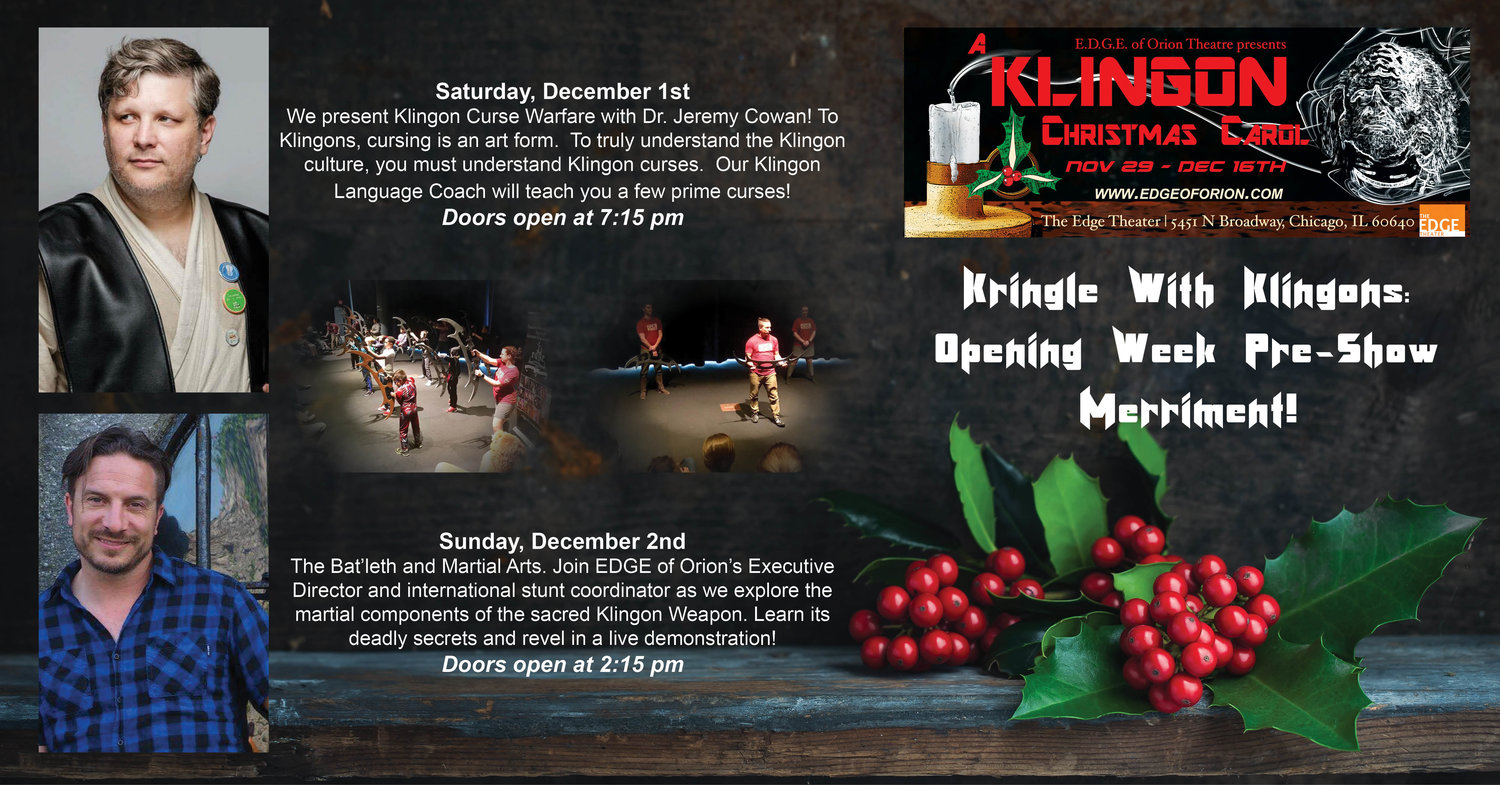 Saturday, December 1st
We present Klingon Curse Warfare with Dr. Jeremy Cowan! To Klingons, cursing is an art form. To truly understand the Klingon culture, you must understand Klingon curses. Our Klingon Language Coach will teach you a few prime curses! Doors open at 7:15 pm.

Sunday, December 2nd
The Bat’leth and Martial Arts. Join EDGE of Orion’s Executive Director and international stunt coordinator, Orion Couling, as we explore the martial components of the sacred Klingon Weapon. Learn its deadly secrets and revel in a live demonstration! Doors open at 2:15 pm.

There are also some bonus “Klingon Koncerts” that will be preformed near the end of the show’s 2018 run:

December 15th from 6 pm to 7 pm we are pounding the table with happiness to announce 5 Year Mission! Five Year Mission is the collaboration of five Star Trek fans who endeavor to write and record a song for each of the episodes of the original Star Trek series from the 1960s. They played at the Adler and at all the cons you love, and on this very special day, this power pop band brings a 1 hour set with blistering music and a great love for the fandom! Purchase tickets here: https://www.brownpapertickets.com/event/3821279

More about the band here: http://fiveyearmission.net/

December 16th we wrap our series with the Queen of Qapla’ herself THE KLINGON POP WARRIOR will be seizing the stage for a one hour set that will rock the Empire! in a 1-hour concert 6-7 pm you will feel like you are at Quarks on a Friday night! https://www.klingonpopwarrior.com/

These concerts are $15 on individually, but you’ll get 50% off when you buy a ticket to see the show. The coupon will be emailed to you when you buy your ticket online and can be applied when you order your ticket!

To take advantage of all the Kaos, buy your tickets early, and get your Klingon Kringle on!