Nintendo Sent Us A Switch

Disclaimer: Nintendo of America provided me with a Nintendo Switch and games for review. All opinions and thoughts are my own. This post contains affiliate links. If you make a purchase via this page I may make a small commission.

You might remember us going to Navy Pier as a family back in October to meet Super Mario. Mr. Dude has been wanting to play Super Mario Odyssey™ at our home ever since. Luckily, Mario must have remembered us because he sent us a Nintendo Switch – Gray Joy-Con

for Christmas! We knew ahead of time, but it was a surprise to Wes.

Mr. Dude would have normally been more excited, but he’d had a fever off and on for a few days leading up to the surprise. Darn pre-school kids sharing strep-throat. Anyways, a few minutes after that video we did another one. This time it was a 360 video of our family playing Mario Kart 8 in the living room. Join us for a bit won’t you?

The whole family LOVES the Nintendo Switch. And there are a lot of great things going for it:

There are a few things to consider before buying a Nintendo Switch too:

Overall we’re thrilled with the system.

We already have our eyes on the Mario + Rabbids® Kingdom Battle

game as a future birthday gift for Mr. Dude. He LOVES Super Mario. Eventually, we’ll want to get a second system and other games for the added gaming options it will offer. I highly recommend the Nintendo Switch to anyone who is a casual gamer, has a family with young kids or enjoys having a cool toy to show off at parties.

Do you have one? What do you think about it? Let me know in the comments or tag me on social! 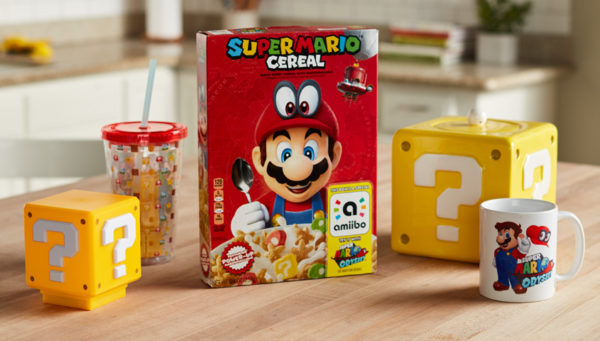 I was grocery shopping right before Christmas when, in the cereal aisle, I found a special limited edition Super Mario Cereal from Kellogg’s. It offers a special in-game bonus exclusively for Super Mario Odyssey™. Buy it if you can find it.